Our CGO'07 paper on machine learning based workload optimization received the CGO "Test of Time" award!

I had a really nice surprise at the last International Symposium on Code Generation and Optimization (CGO) - our CGO'07 research paper on "rapidly selecting good compiler optimizations using performance counters" co-authored with my colleagues from INRIA and the University of Edinburgh has won the "test of time" award! This award recognises outstanding papers published at GGO one decade earlier, whose influence is still strong today!

When preparing that paper, I really suffered a lot from the continuously changing software and hardware stack when performing and processing huge amounts of experiments to build and train models which could predict optimizations. That experience eventually motivated me to continue my work on machine learning based optimization as a community effort [1,2] while sharing all my benchmarks, data sets, models, tools and scripts as customizable and reusable components. It also motivated me to develop an open-source framework and repository to crowdsource empirical experiments (such as multi-objective optimization of deep learning and other realistic workloads) across diverse hardware and input provided by volunteers which later became known as the Collective Knowledge (CK):
Therefore, I would really like to thank the community for such a strong support of our open and reproducible research initiative during past 10 years and for all the constructive feedback and help to develop common experimental infrastructure and methodology!

For example, CK now assists various Artifact Evaluation initiatives at the premier ACM conferences on parallel programming, architecture and code generation (CGO, PPoPP, PACT, SC), which aim to encourage sharing of code and data, and independently validate experimental results from published papers:
We also use CK to crowdsource benchmarking and optimizations of realistic workloads across embedded devices such as mobile phones and tablets, while publicly sharing all optimization statistics for further collaborative analysis and mining:
dividiti (a startup based in Cambridge, UK) and the cTuning foundation (non-profit research organization) also use above technology to lead interdisciplinary research with ARM, General Motors and other companies to build faster, smaller, more power efficient and more reliable software and hardware:
Hope you will also join our community effort to accelerate computer systems' research and enable cheap and efficient computing from IoT devices to supercomputers! 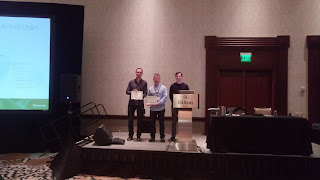 Posted by Grigori Fursin at 06:20 No comments: